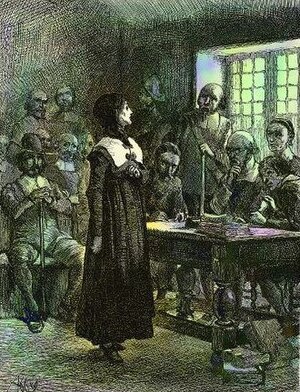 Instructed in religion by the seventeenth-century midwife Anne Hutchinson, a devoted group of unorthodox Puritans formed a network in Massachusetts and, eventually, established a residential community of Pocasset (in present-day Rhode Island) with utopian leanings. There, Hutchinson’s followers practiced religious freedom and, influenced by an Anabaptist offshoot called Familism, came to reject governmental and church authority.

Born in England in 1591 and married in 1612, Hutchinson discovered she was a prophet and came to experience revelations from God. She found hidden meaning in the Biblical passage Jeremiah 46:27-28, which revealed to her that God would protect her but destroy England. She and her husband set sail to Massachusetts in 1634.[1]

Upon arrival in Boston, Hutchinson delivered twice-weekly lectures to other women about religion. Men also sought her advice, and Hutchinson claimed that after a half-hour conversation with any man she could determine whether he was predestined for heaven. Inspired by Familist ideas, Hutchinson’s students believed that entering a “covenant of grace” with God would deliver them to control by the Holy Spirit and ideally enable them to live a life of never-ending joy.[2] Since this divine covenant did not involve mediation from a priest, Hutchinson has been called an “antinomian” and a “religious individualist.”[3] According to biographer Michael Winship, Massachusetts’s often-elected governor John Wintrhop “portrayed her as a hell-spawned agent of destructive anarchy.”[4]

Egalitarian views have been attributed to Hutchinson. Peter Gelderloos claims that “Anne won popular support for her well argued ideas, which opposed the slavery of Africans and Native Americans, criticized the church, and insisted that being born a woman was a blessing and not a curse.”[5] Hutchinson’s male followers refused to fight in the genocidal war against the Pequots, since they determined that the military chaplain was not in a covenant of grace.[6] Hutchinson’s followers were in touch with the progressive theologian Roger Williams who believed the land belonged to the Indians and thus could not simply be parceled out by the King of England.[7]

Hutchinson and her followers found support from Boston’s open-minded minister John Cotton, who shared some of her radical ideas. Hutchinson apparently told followers that Cotton was the only decent minister in the entire Massachusetts Bay Colony.[8]

In November 1637, the colony’s General Court put Hutchinson on trial for sedition and slander. Citing divine revelations, Hutchinson dramatically warned the prosecutors, “[I]f you go in this course you begin you will bring a curse upon you and your posterity.”[9] The Court sentenced her to banishment from Massachusetts and imprisonment in the meantime.[10]

Meanwhile, Roger Williams persuaded Hutchinson’s followers, including her husband William, to move to Aquidneck (present-day Rhode Island). Williams convinced the wealthy merchant William Coddington to purchase the land from Naragansett sachems. There, allies of Hutchinson founded the settlement of Pocasset and waited for Anne to arrive after her imprisonment ended.[11] Himself banished from Massachusetts, Roger Williams lived in Aquidneck on land he had received from the Naragansetts. There he had established the settlement of Providence, which Gelderloos says was "based on the idea of total equality and freedom of conscience for all inhabitants, and friendly relations with the indigenous neighbors."[12] In its early days, Providence had "virtually no government" according to Rothbard; Williams himself described a consent-based decision-making process: "The masers of families have ordinarily met once a fortnight and consulted about our common peace, watch and plenty; and mutual consent have finished all matters of speed and pace."[13]

Under house arrest in Roxbury, Hutchinson kept teaching and sharing her ideas. The heretic-hunting minister Thomas Shepard visited Hutchinson and dishonestly told her he was not trying to entrap her. So, she freely shared her thoughts with him, and he reported those thoughts to her Boston church. The minister Cotton turned on Hutchinson, and the church excommunicated her for allegedly lying (about her beliefs) and doctrinal errors.[14] Hutchinson remained steadfast and declared, “Better to be cast out of the Church than to deny Christ.”[15]

Ordered to leave Massachusetts, Hutchinson went to Pocasset, where she taught all genders together at Sunday meetings at her house.[16] In 1639, there was a successful effort to democratize Pocasset, eliminating oligarchical distinction, instituting jury trial, and separating church from state. Pocasset was renamed Portsmouth.[17] Hutchinson may have been involved or even a leader, but the revolt was led in large part by Hutchinson's friend Samuel Gorton who "attacked the legitimacy of all governing magistrates."[18] Anne’s husband was elected the chief judge, but she soon persuaded him to give up that post, as Roger Williams wrote, “because of the opinion which she had newly taken up, of the unlawfulness of magistry.” Murray Rothbard claims that Hutchinson arrived at “the ultimate bounds of libertarian thought: to individualist anarchism. No magistry whatever was lawful.”[19] Hutchinsons' descendant and biographer Eve LaPlante describes Anne's "seemingly anarchic" view that people in whom the Holy Spirit dwelt "cannot be ruled by a secular authority." The settlement had about 200 families by 1640. They "had become friends" with the Naragansetts.[20]

The settlement had full religious liberty, and Hutchinson herself developed an increasingly radical theology. She convinced three or four families to become Seekers, meaning that they rejected the legitimacy of all churches that ever existed since the time of the Apostles.[21] After Hutchinson’s husband died in 1642, she desired to leave Pocasset, in part to get further away from Massachusetts officials who now (according to Rothbard) considered her a witch deserving to die.[22] So, that year she and three families purchased land from the Wecqueasgeek Indians, in the present-day Bronx which was then colonized by the Dutch. Emphasizing their shared humanity, Hutchinson told the Wecqueasgeek that she and they were “all one Indian.” Unfortunately, a corrupt Dutch official may have pocketed her followers’ money instead of properly delivering it to the Wecqueasgeek for their land. In August or September of 1643, an Indian raid killed Hutchinson and most members of the families living with her. Sixteen people died in total.[23]