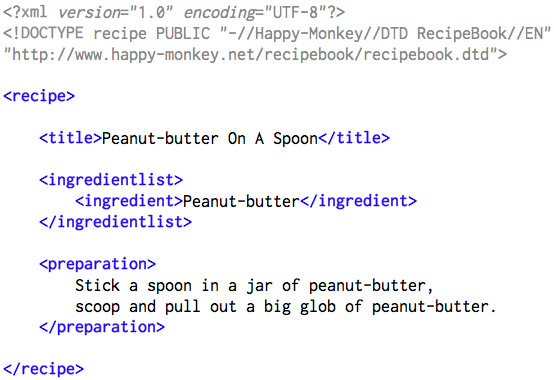 The following is an example of the classic Hello world program, a common test employed for comparing programming languages.

A better way of using CSS is to link to an actual CSS file, like this: <link rel="stylesheet" href="main.css">

JavaScript is a client-side scripting language, a "real" programming language in comparison to HTML or CSS. It's designed to do things inside a Web browser: when you click a button, when you see a popup, or when something moves on the page.

<syntaxhighlight lang="html4strict"> <script type="text/javascript"> </script> </syntaxhighlight> After the HTML and the CSS on a page loads, JavaScript is executed. Frequently, you'll see JavaScript in the <head></head> tags of an HTML document, so that it loads first; no matter where it is in the document, it's executed by the browser after HTML and CSS.

PHP is a server-side scripting language. In contrast to JavaScript, it executes on the Web server (the computer you're requesting a website from) rather than your local Web browser.

Although PHP is executed by a server before output is sent to the client Web browser, we typically include PHP inside HTML tags like this: <syntaxhighlight lang="php"> <!DOCTYPE html> <meta charset=utf-8> <title>PHP Test</title> <?php

Free Software on the Web

Perhaps the most important thing to understand about the modern Web is that it's powered by free/open-source software. This is not a coincidence. The creators of the World Wide Web were working on Unix-based, free software operating systems. Unix-based systems were good at time-sharing and networking, designed around this maxim:

The Web is based upon these principles, and each webpage is available as text source (right-click or command-click > View Page Source or View Source). Because of this free environment of sharing, where source code is readily published and copied, the Web has grown into a powerful medium. 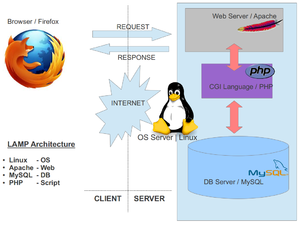 Apache is the most popular Web server, and relies upon the LAMP stack (typically Linux, Apache, MySQL, PHP). In this arrangement, PHP is doing the "heavy lifting", executing on the server-side, talking to the MySQL database, and giving the client HTML + CSS + JavaScript in return.

When you're clicking "Save" in a CMS like WordPress, this is what you're doing!

Contrast that to a non-LAMP interaction, when you view plain HTML in a browser:

As you can see, LAMP interactions are more complicated, but they allow for separation of the content into a MySQL database. In this way, a CMS like WordPress or MediaWiki can separate the actual content of a site from both its structure and its style.