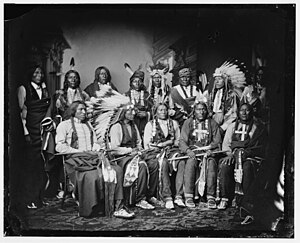 Even more impressive than the example provided by the Makhnovists is the victory won by several indigenous nations in 1868. In a two year war, thousands of warriors from the Lakota and Cheyenne nations defeated the US military and destroyed several army forts during what became known as Red Cloud’s War. In 1866, the Lakota met with the US government at Fort Laramie because the latter wanted permission to build a military trail through the Powder River country to facilitate the influx of white settlers who were seeking gold. The US military had already defeated the Arapaho in its attempt to open the area for white settlers, but they had been unable to defeat the Lakota. During the negotiations it became apparent that the US government had already started the process of building military forts along this trail, without even having secured permission for the trail itself. The Oglala Lakota war chief Red Cloud promised to resist any white attempts to occupy the area. Nonetheless in the summer of 1866 the US military began sending more troops to the region and constructing new forts. Lakota, Cheyenne, and Arapaho warriors following the direction of Red Cloud began a campaign of guerrilla resistance, effectively closing down the Bozeman trail and harassing the troops stationed in the forts. The military sent down the order for an aggressive winter campaign, and on December 21, when their wood train was attacked yet again, an army of about one hundred US soldiers decided to pursue. They met a decoy party including the Oglala warrior Crazy Horse and took the bait. The entire force was defeated and killed by a force of 1,000–3,000 warriors that waited in ambush. The commanding officer of the white soldiers was knifed to death in hand to hand combat. The Lakota left a young bugle boy who fought with just his bugle covered in a buffalo robe as a sign of honor — with such acts the indigenous warriors demonstrated the possibility of a much more respectful form of warfare, in contrast with the white soldiers and settlers who often cut out fetuses from pregnant women and used the amputated genitals of unarmed victims as tobacco pouches.

In the summer of 1867 US troops with new repeating rifles fought the Lakota to a standstill in two battles, but they failed to carry out any successful offensives. In the end, they asked for peace talks, which Red Cloud said he would only grant if the new military forts were abandoned. The US government agreed, and in the peace talks they recognized the rights of the Lakota to the Black Hills and Powder River country, a huge area currently occupied by the states of North Dakota, South Dakota, and Montana.

During the war, the Lakota and Cheyenne organized without coercion or military discipline. But contrary to the typical dichotomies, their relative lack of hierarchy did not hamper their ability for organization. On the contrary, they held together during a brutal war on the basis of a collective, self-motivated discipline and varying forms of organization. In a Western army, the most important unit is the military police or the officer who walks behind the troops, pistol loaded and ready to shoot anyone who turns and runs. The Lakota and Cheyenne had no need for discipline imposed from above. They were fighting to defend their land and way of life, in groups bound by kinship and affinity.

Some fighting groups were structured with a chain of command, while others operated in a more collective fashion, but all of them voluntarily rallied around individuals with the best organizational abilities, spiritual power, and combat experience. These war chiefs did not control those who followed them so much as inspire them. When morale was low or a fight looked hopeless, groups of warriors often went home, and they were always free to do so. If a chief declared war, he had to go, but no one else did, so a leader who could not convince anyone to follow him to war was engaging in an embarrassing and even suicidal venture. In contrast, politicians and generals in Western society frequently start unpopular wars, and they are never the ones to suffer the consequences.

The warrior societies played an important role in the indigenous organization of warfare, but women’s societies were vital as well. They played a role similar to that of the Quartermaster in Western armies, provisioning food and materials, except that where the Quartermaster is a simple cog obeying orders, the Lakota and Cheyenne women would refuse to cooperate if they disagreed with the reasons for a war. Considering that one of Napoleon’s most important contributions to European warfare was the insight that “an army marches on its stomach,” it becomes apparent that Lakota and Cheyenne women exercised more power in the affairs of their nations than the histories written by men and white people would lead us to believe. Additionally, women who chose to could fight alongside the men.

Despite being impossibly outnumbered by the US military and white settler paramilitaries, the Native Americans won. After Red Cloud’s War, the Lakota and Cheyenne enjoyed nearly a decade of autonomy and peace. Contrary to pacifist allegations about militant resistance, the victors did not begin oppressing one another or creating uncontrollable cycles of violence just because they had violently fought off the white invaders. They won themselves several years of freedom and peace.

In 1876, the US military again invaded the Lakota territory to attempt to force them to live on the reservations, which were being transformed into concentration camps as part of the campaign of genocide against the indigenous populations. Several thousand troops were involved, and they met with several early defeats, the most notable of which was the Battle of Greasy Grass Creek, also known as the Battle of the Little Bighorn. Around 1,000 Lakota and Cheyenne warriors, defending themselves from an attack, decimated the cavalry unit commanded by George A. Custer and killed several hundred soldiers. Custer himself had previously invaded Lakota lands to spread reports of gold and provoke another wave of white settlers, who were a major driving force for the genocide. The settlers, aside from being an armed paramilitary force responsible for a large share of the encroachments and murders, provided a sufficient pretext for bringing in the military. The logic was that those poor humble homesteaders, in the act of invading another country, had to be defended from “marauding Indians.” The US government ultimately won the war against the Lakota, by attacking their villages, invading their hunting grounds, and instituting strong repression against the people living on the reservations. One of the last to surrender was the Oglala warrior Crazy Horse, who had been one of the most effective leaders in the fight against the US military. After his group agreed to come into the reservation, Crazy Horse was arrested and assassinated.

Their ultimate defeat does not indicate a weakness in the horizontal organization of the Lakota and Cheyenne so much as the fact that the white American population trying to exterminate them outnumbered these indigenous groups by a thousand to one, and had the ability to spread disease and drug addiction on their home turf while destroying their food source.