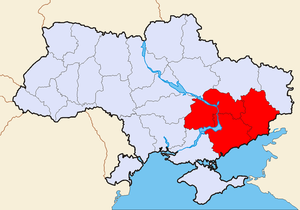 Approximate anarchist territory in Ukraine. Transferred from en.wikipedia; transfer was stated to be made by User:P.o.l.o.. 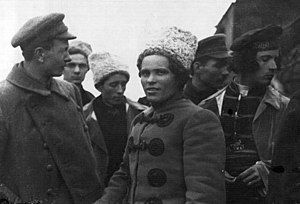 For a broader article, see Russian Revolution and Anarchy.

From 1918 to 1921, Ukranians established an autonomous region with seven million residents. Surrounding the city of Gulai-Polya, residents ran several anarcho-communist communes and held regional Congresses. The Insurrectionary Army, with democratic rule-making procedures and elected officers, defended the region against Austrian and German invaders, the right-wing White Army and ultimately against the Bolsheviks' Red Army. The movement's participants are often called “Makhnovists,” after the region's prominent organizer and military commander Nestor Makhno. By the end of 1921, the Red Army had wiped out the Makhnovist movement.

While opposing nationalism, the Makhnovists sought “to encourage local culture and language.” In October of 1919, the Insurrectionary Army encouraged school teachers to teach their classes in whatever language the local population preferred.[1]

When the Insurrectionary Army liberated a town from state control, it would post a notice clarifying they would not impose any authority on the town:

Workers, your city is for the present occupied by the Revolutionary Insurrectionary (Makhnovist) Army. This army does not serve any political party, any power, any dictatorship. On the contrary, it seeks to free the region of all political power, of all dictatorship. It strives to protect the freedom of action, the free life of the workers, against all exploitation and domination.

The Makhnovist Army does not therefore represent any authority. It will not subject anyone to any obligation whatsoever. Its role is confined to defending the freedom of the workers. The freedom of the peasants and the workers belongs to themselves, and should not suffer any restriction.[3]

The territory's workers and peasants governed themselves without a state, but the most systematic direct democracy took place in the towns that organized themselves as free communes. The first commune, “based on the non-authoritarian principle”, was located near Gulai-Polya and had over 300 residents.[4]

The Makhovists organized periodic Regional Congresses, where delegates from many communities gathered. Voline describes the Regional Congress of October 1919, where over 200 delegates showed up, made their own agenda, and made decisions on issues like how to provide medical care to soldiers in the Insurrectionary Army.[5]

Voline writes that the communes near Gulai-Polya were “experiments in free communism.”[6] Workplaces federated into districts, and districts federated into regions.[7] The Makhnovists established a Commission of Initiative, made of delegates from labor unions. The Commission advised workers, helping them restart factories and railroads. The Makhnovists continued using paper currency but planned “more fundamental reforms” toward anarcho-communism. In Gulai-Polya, people organized classes and schools based on the anti-authoritarian pedagogy of the Spanish educator Fransisco Ferrer.[8] In Gulya-Polya, anarchists set up three secondary schools, and literacy increased throughout the area.[9]

The Makhnovists “demolished prisons wherever they went. In Berdyansk the prison was dynamited in the presence of an enormous crowd, which took an active part in its destruction. At Aleksandrovsk, Krivoi-Rog, Ekaterinoslav and elsewhere, prisons were demolished or burned by the Makhnovists. Everywhere the workers cheered this act.”[10] In a 7 Jaunary 1920 declaration, the Makhnovists called for police to be replaced by grassroots self-defense groups.[11]

An episode at a regional congress on 12 October 1919 shows how militants held their own Commanders accountable to rules they had set. Delegates called Commander Klein to explain why he had gotten very drunk at a party after Klein had himself posted notices against excessive public drinking. A delegate asked him, “Tell me, Commander Klein, as a citizen of our city, and its military commander, do you consider yourself morally obliged to obey your own recommendations or do you believe yourself outside or above this notice?” Having been publicly called out for his hypocrisy, Klein apologized, complained of boredom at a civilian post, and asked to be sent back to the battlefront.[12]

In 1918, the Communist government signed the 1918 Brest-Litovsk Treaty, which without the consent of the Ukranians, ceded the Ukraine to the control of the German and Austrian empires.[13] As these empires prepared to return expropriated land to Ukranian landlords, peasants organized under the auspices of the all-volunteer Revolutionary Insurgent Army of the Ukraine (RIAU), guided by Anarchist organizer and ex-prisoner Nestor Makhno. This army elected officers and decided on all its rules at general assemblies. "The army was organized on a specifically libertarian, voluntary basis," writes Daniel Guerin.[14]

By December of 1918, the Revolutionary Insurgent Army "was just over 110,000 strong, divided into four Corps, consisting of 83,000 infantry, 20,000 cavalry, assault groups, artillery, reconnaissance, medical, and other detachments, including armoured cars and seven armoured trains."[15]

The Makhnovists had to fight not only against the German and Austrian invaders, but also against Ukranian nationalists, White Army counter-revolutionaries, and ultimately against Vladimir Lenin and Leon Trotsky's Red Army. In 1919, Trotsky declared his preference for a White Army victory against the Makhnovists: "It would be better to yield the whole Ukraine to Denikin, a frank counter-revolutionary, who could be easily compromised later by means of class propaganda, while the Makhnovichina developed in the depths of the masses and aroused the masses against themselves.”[16] The Communists stopped supplying the Insurgent Army and even tried to assassinate Makhno in May 1919 according to Voline. After a pro-Makhnovist council in Gulai-Polya called for a Fourth Regional Congress to take place that June, the Red Army, following Trotsky's orders, attacked the village, destroying the communes and seizing and executing Insurgent Army militants. On 4 June, Trotsky issued Order No. 1824, which declared the Fourth Congress “forbidden," with all its promoters and delegates subject to be “arrested immediately.”[17] In response, the Congress was cancelled. Makhno temporarily fled in order to avoid being arrested by the Red Army.

The Makhnovists' impressive military accomplishments included a victory against Denikin's White Army in the fall of 1919 and a joint victory with the Bolsheviks against Wrangel's reconstituted White Army in 1921. Peter Gelderloos summarizes some of these battles:

They went on to hold the southern front against the armies of the White Russians — the aristocratic, pro-capitalist army funded and armed largely by the French and Americans — while their supposed allies, the Bolsheviks, withheld guns and ammunition and began purging anarchists to stop the spread of anarchism emanating from the Makhnovist territory. The White Russians eventually broke through the starved southern front, and reconquered Gulyai-Polye. Makhno retreated to the West, drawing off a large portion of the White armies, the remainder of which beat back the Red Army and advanced steadily towards Moscow. At the battle of Peregenovka, in western Ukraine, the anarchists obliterated the White army pursuing them. Although they were outnumbered and outgunned, they carried the day by effectively executing a series of brilliant maneuvers developed by Makhno, who had no military education or expertise. The volunteer anarchist army raced back to Gulyai-Polye, liberating the countryside and several major cities from the Whites. This sudden reversal cut off the supply lines of the armies that had almost reached Moscow, forcing them to retreat and saving the Russian Revolution.

For another year, an anarchist society again flourished in and around Gulyai-Polye, despite the efforts of Lenin and Trotsky to repress the anarchists there the way they had repressed them throughout Russia and the rest of Ukraine. When another White incursion under General Wrangel threatened the revolution, the Makhnovists again agreed to join the Communists against the imperialists, despite the earlier betrayal. The anarchist contingent accepted a suicide mission to take out enemy gun positions on the Perekop isthmus of Crimea; they succeeded in this and went on to capture the strategic city of Simferopol, again playing a crucial role in defeating the Whites. After the victory, the Bolsheviks surrounded and massacred most of the anarchist contingent, and occupied Gulyai-Polye and executed many influential anarchist organizers and fighters. Makhno and a few others escaped and confounded the massive Red Army with an effective campaign of guerrilla warfare for many months, even causing several major defections; in the end, however, the survivors decided to escape to the West.[18]

Contrary to a myth that the Makhnovists tolerated anti-Semitism, Makhno organized meetings to confront anti-semitism and sent guns and ammunition to rural Jewish communities. Working class Jews participated in the Makhnovists' assemblies and even volunteered for their army. After a 12 May 1919 pogrom killed 20 Jews near Aleksandrovsk, the Makhnovist army established a commission to investigate the incident and then shot the perpetrators. [19]

Peter Ashinov describes the Makhnovists' outreach to the city workers: “The Makhnovshchina . . . understands that the victory and consolidation of the revolution . . . cannot be realised without a close alliance between the working classes of the cities and those of the countryside. The peasants understand that without urban workers and powerful industrial enterprises they will be deprived of most of the benefits which the social revolution makes possible. Furthermore, they consider the urban workers to be their brothers, members of the same family of workers.”[20]

Anarchists in the cities did not always lend concrete support to the Makhovists, a situation Arshinov attributed to Anarchists' preoccupation with theory rather than practice and organizational weakness. Arshinov laments, " We are obliged to state that Russian anarchists remained in their circles and slept through a mass movement of paramount importance, a movement which is unique in the present revolution for having undertaken to realize the historic tasks of oppressed humanity."[21] Murray Bookchin recounts, "A number of urban anarchists, most notably Voline, Arshinov and Aron Baron, found their way to the Ukraine, where they functioned on Makhno's propaganda and educational committees; but other urban anarchists inflexibly denigrated the mahhnovshchina as an elemental peasant movement with the traits of a military command-no less!"[22]