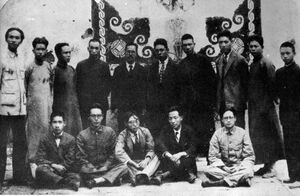 From 1929 to 1931, two million Korean migrants ran an autonomous, Anarchist zone in Shinmin, a rural province in Manchuria (in China) across the border from Korea. Residents made decisions at village assemblies, which confederated into district councils and area councils.[1] The confederation, known as the Korean People’s Association in Manchuria (KPAM), had administrative departments that assisted with agriculture, education, finance, military affairs, and health. Staff in these departments received no more than the province's average wage. The KPAM described itself as "an independent self-governing cooperative system of the Korean people who assembled their full power to save our nation by struggling against Japan".[2]

Many of Shinmin's residents had been active in Korea's March 1 Movement against Japanese colonialism in 1919 and fled Japanese suppression by migrating to China. There they became active in an Anarchist movement that included the Korean Anarchist Federation in Manchuria (KAF-M), the Korean Anarcho-Communist Federation (KACF), and a section of the Korean Independence Association (KIA) associated with Kim Jwa-Jin, an Anarchist military strategist sometimes compared to Nestor Makhno. These three groups collaborated to launch the KPAM in Shinmin by August of 1929.[3]

The Shinmin uprising had top-down origins that it tried to transcend. The KPAM initially appointed its own staff, but it also sent teams to organize village assemblies in order to make the structure more democratic.[4] The new structure "quickly gained grassroots support because it was based on worker and community self-organisation".[5] The KPAM organized mutual aid banks, a primary and secondary school system, and a militia.[6]

The militia defended the province from Japanese and Stalinist attacks. By the summer of 1931, Anarchists decided they could no longer defend the war-torn province and decided to go underground.[7] From southern China, the KAF-M and KACF continued fighting against Japan until Japan's defeat at the end of World War II.[8] The Tokologo African Anarchist Collective describes what happened next: "The American ruling class conquered the Japanese state, and then placed Korea under American control. A war broke out, and the country was eventually split into a Russian- and American-backed North and South, each run by dictators."[9]

Korean anarchists won an opportunity to demonstrate people’s ability to make their own decisions in 1929. The Korean Anarchist Communist Federation (KACF) was a huge organization at that time, with enough support that it could declare an autonomous zone in the Shinmin province. Shinmin was outside of Korea, in Manchuria, but two million Korean immigrants lived there. Using assemblies and a decentralized federative structure that grew out of the KACF, they created village councils, district councils, and area councils to deal with matters of cooperative agriculture, education, and finance. They also formed an army spearheaded by the anarchist Kim Jwa-Jin, which used guerrilla tactics against Soviet and Japanese forces. KACF sections in China, Korea, and Japan organized international support efforts. Caught between the Stalinists and the Japanese imperial army, the autonomous province was ultimately crushed in 1931. But for two years, large populations had freed themselves from the authority of landlords and governors and reasserted their power to come to collective decisions, to organize their day-to-day life, pursue their dreams, and defend those dreams from invading armies.[10]

The Manchurian Revolution was unusual in that it was initially inserted from above, but quickly gained grassroots support because it was based on worker and community self-organisation.80 It demonstrated how the uplift of the working class through economic autonomy and education could combine seamlessly with a bottom-up system of decision-making and a militant defensive programme. In 1925, Korean anarchists helped form a “People’s Government” administration in the Shinmin Prefecture bordering on Korea, which helped democratise the prefecture. Subsequently, the Korean Anarchist Federation (KAF) militant Kim Jong-Jin, a close relative of the anarchist-sympathetic Korean Independence Army general Kim Jao-Jin, whose forces effectively controlled the Shinmin Prefecture, submitted an anarchist plan to the military command. It advocated the formation of voluntary rural co-operatives, self-managed by the peasantry, and a comprehensive education system for all, including adults. After some debate, and input from Yu Rim (the alias of Ko Baeck Seong), a founder of the Korean Anarchist Communist Federation (KACF), the general and his staff accepted the plan, and the anarchists were given the go-ahead for their plan.

In 1929, anarchist delegates from Hailun, Shihtowotze in the Chang Kwan Sai Ling Mountains, Sinanchen, Milshen, and other centres, also formed the Korean Anarchist Federation in Manchuria (KAF-M) at Hailin. The Shinmin Prefecture was transformed into the Korean People’s Association in Manchuria, a regional, libertarian socialist administrative structure, also known as the General League of Koreans (Hanjok Chongryong Haphoi) or HCH, which embraced a liberated territory of some two million people. This self-managed structure was comprised of delegates from each area and district, and organised around departments dealing with warfare, agriculture, education, finance, propaganda, youth, social health, and general affairs, the latter including public relations. Delegates at all levels were ordinary workers and peasants who earned a minimum wage, had no special privileges, and were subject to decisions taken by the organs that mandated them, including the co-operatives. Notwithstanding its bizarre origins from a meeting between the Kims, Yu, and the Army command, the HCH was based on free peasant collectives, mutual aid banks, an extensive primary and secondary schooling system, and a peasant army. The militia was initially drawn from the Army, but increasingly supplemented by fighters trained at local guerrilla schools. Again, we see the Bakuninist strategy of specific organisations, the KAF-M and the KAFC, operating under the aegis of a delegated civilian mass organisation based on free communes, the HCH, and defended by armed militia. In echo of the Zapatistas in the Mexican Revolution, the “Manchurians” operated almost exclusively in rural areas and relatively small towns. In Fukien province, southern China, which was under informal Japanese influence, situated as it is across the Formosa Strait, KAF-C members participated in the Chuan Yung People’s Training Centre, an initiative aimed at establishing an autonomous self-rule district in Fukien, emulating Shinmin. They were subsequently involved in attempts to form a peasant militia and rural communes in the area. But to the north, the Manchurian Revolution was destroyed by the Japanese invasion of Manchuria in 1931, and the KAF-M and KACF were forced to fight a rearguard retreat into southern China, where they continued the armed struggle against Imperial Japan alongside their Chinese comrades until Japan’s defeat in 1945.