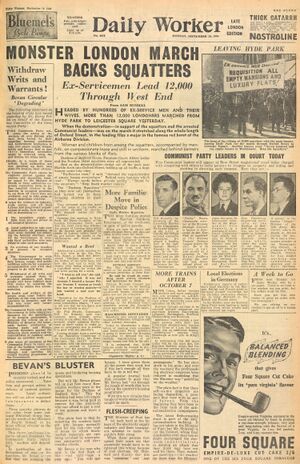 From Colin Ward, Anarchy in Action [1]:

Between June and October of [1946] 40,000 homeless people in England and Wales, acting on their own initiative, occupied over 1,000 army camps. They organised every kind of communal service in the attempt to make these bleak huts more like home - communal cooking, laundering and nursery facilities, for instance. They also federated into a Squatters' Protection Society. One feature of these squatter communities was that they were formed from people who had very little in common beyond their homelessness - they included tinkers and university dons...

The 1946 campaign was based on the large-scale seizure of army camps emptied at the end of the war. It started in May of that year when some homeless families in Lincolnshire occupied an empty camp, and it spread like wildfire until hundreds of camps were seized in every part of Britain. By October 1,038 camps had been occupied by 40,000 families in England and Wales, and another 5,000 families in Scotland. That month, Aneurin Bevan, the Minister of Health who was responsible for the government's housing programme, accused the squatters of 'jumping their place in the housing queue'. In fact, of course, they were jumping right out of the queue by moving into buildings which would not otherwise have been used for housing purposes. Then suddenly the Ministry of Works, which had previously declared itself not interested, found it possible to offer the Ministry of Health 850 former service camps, and squatting became 'official'.

Some of the original squatter communities lasted for years. Over a hundred families, who in 1946 occupied a camp known as Field Farm in Oxfordshire, stayed together and twelve years later were finally rehoused in the new village of Berinsfield on the same site.

A very revealing account of the differences between the 'official' and the 'unofficial' squatters comes from a newspaper account of a camp in Lancashire after the first winter:

There are two camps within the camp - the official squatters (that is the people placed in the huts after the first invasion) and the unofficial squatters (the veterans, who have been allowed to remain on sufferance). Both pay the same rent of lOs a week - but there the similarity ends. Although one would have imagined that the acceptance of rent from both should accord them identical privileges, in fact, it does not. Workmen have put up partitions in the huts of the official squatters and have put in sinks and other numerous conveniences. These are the sheep; the goats have perforce to fend for themselves.

A commentary on the situation was made by one of the young welfare officers attached to the housing department. On her visit of inspection she found that the goats had set to work with a will, impro­vising partitions, running up curtains, distempering, painting and using initiative, The official squatters, on the other hand, sat about glumly without using initiative or lending a hand to help themselves and bemoaning their fate, even though might have been removed from the most appalling slum property. Until the overworked corporation workmen got around to them they would not attempt to improve affairs themselves.[2]

This story reveals a great deal about the state of mind that is induced by free and independent action, and that which is induced by dependence and inertia: the difference between people who initiate things and act for themselves and people to whom things just happen.