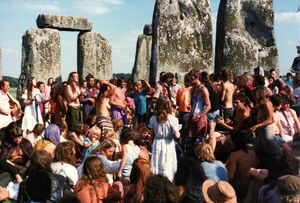 In England, a yearly festival of travellers and hippies that converged at Stonehenge to mark the summer solstice became a major counter-cultural autonomous zone and an experiment in “collective anarchy.” Beginning in 1972, the Stonehenge Free Festival was a gathering that lasted for the month of June until the solstice. More than a music festival, it was a non-hierarchical space for the creation of music, art, and new relationships, as well as spiritual and psychedelic exploration. It became an essential ritual and social event in England’s growing traveller culture. By 1984, it drew 30,000 participants who created a self-organized village for the month. In the words of one participant, it was “Anarchy. And it worked.”[1] The Thatcher regime saw it as a threat; in 1985 they banned the 14th annual Stonehenge Free Festival, brutally attacking the several hundred people who came to set it up in an assault known as the Battle of the Beanfield.