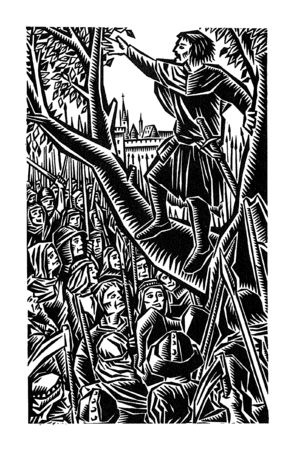 Starting in 1419, during the Husserite Christian heretical revolution of Bohemia (in today's Czech Republic), a radical sect called the Taborites ran a network of communist and stateless towns, most prominently Tabor itself (near Prague), named after the Biblical mountain. Although the Taborites held onto their territory for decades, their experiment in anti-authoritarian communism only lasted a couple years due to isolation and a failure to set up an economy capable of producing what people needed. As the Taborite movement shifted in a hierarchical direction, an anarchistic Adamite sect emerged.

The Husserite revolution against Papal and and German authority began after the preacher John Hus, was burnt as a heretic in 1414 by the church. Hardly a radical, Hus had simply claimed that the Papacy was a human institution, not a divine one. Most Husserites belonged to the lower classes, including "weavers and other cloth-workers, tailors, brewers, smiths - in fact manual workers in many trades." The revolt initially sought merely reform, but sections of the revolution took on much more radical dimensions beginning with an insurrection in 1419.[1]

During this insurrection, radical Husserites established communes which, Cohn explains, "formed an embryonic society which was wholly outside the feudal order and which attempted to regulate its affairs on the basis of brotherly love instead of force."[2] These communards later became known as the Taborites, after their most prominent stronghold, Tabor. The Taborites wanted to abolish private property and build what Cohn (unsympathetically) calls an "anarcho-communist order."[3]

With a military led by John Zizka, the Taborites managed to "fight off the invaders in battle after battle."[4] Taborite proclamations called for social horizontality and the expropriation of the rich:

"All shall live together as brothers, none shall be subject to another."

"All lords, nobles and knights shall be cut down and exterminated in the forests like outlaws."

"As Mine and Thine do not exist at Tabor, but all possession is communal, so all people must always hold everything in common, and nobody must possess anything of his own; whoever owns private property commits a mortal sin."[5]

Taborites shared all wealth equally and socialized some workplaces.[6] However, their failure to socialize production on a large scale became a major weakness. Cohn goes so far as to argue that "they altogether ignored the need to produce."[7]

The movement controlled five strongholds in February 1420, and proclaimed that all other towns would be consumed by fire. Many sold their belongings and moved to these five towns.[8] The Taborites were not above violent attacks on their ideological opponents. The Taborite preacher Jan Capek proclaimed, "Cursed is the man who restrains his sword from spilling the blood of the enemies of the Christ. Each believer must wash his hands in blood."[9]

Silvia Federici notes, "Women were very active in the Taborite movement as in all heretic movements. Many fought in the battle for Prague in 1420 when 1500 women dug a long trench which they defended with stones and pitchforks."[10]

Major causes of anarchism's failure among the Taborites included the failure to communize production, isolation, and the pressures of warfare.

When wealth ran out, the Taborites resorted first to expropriating nearby wealthy households and then to robbing neighoring peasant communities. Soon, the Taborite communes gave up their attempts toward communism and horizontality.[11]

Quoted by Bookchin, Kenneth Rexroth emphasizes the impacts of isolation:

If socialism in one country is doomed to become deformed and crippled, communism in one city is impossible for any length of time. Sooner or later the garrison society will weaken but the outside world does not. It is always there waiting, strongest perhaps in times of peace. Tabor was never able to balance its popular communism of consumption with an organized and planned communism of production, nor the exchange of goods between city communes and peasant communes.[12]

Another factor was that the pressures of warfare prompted the Taborites to adopt a hierarchical structure. While Cohn vastly understates the ability of anarchists to engage in self defense, there may be some truth to his commentary: "Above all, from March 1420 onwards the Taborites were involved in the national war against the invading armies...Not even a Taborite army could function without a hierarchy of demand."[13]

Within the Taborite towns, a radical strand of about two hundred people called the Adamites emerged, heavily influenced by the Free Spirit Heresy. The Adamites, deemed "ultra-anarchists" by Cohn, lived without property and without marriage. They held naked rituals around a fire.[14] Murray Bookchin describes the Adamites as a hedonistic sect of the predominantly ascetic Taborites.[15]

The Adamites enjoyed territorial autonomy for about two months, from December 1420 to January 1421.[16] Under attack, the Adamites declared war on surrounding villages and burnt alive men, women, and children.[17] Tabor's army exterminated the Adamites in October 1421.[18]