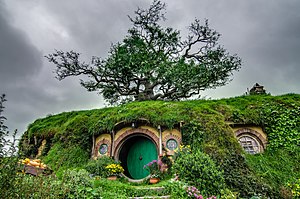 The Shire is a region populated by festive humanoid creatures called hobbits in J.R.R. Tolkein's fantasy novels The Lord of the Rings and The Hobbit. In the prologue to the first book of Lord of the Rings, Tolkein writes that the Shire has "hardly any ‘government’. Families for the most part managed their own affairs."[1]

Every seven years, the hobbits elect a Mayor, who performs ceremonial functions and manages the post office and the twelve sheriffs. The sheriffs do not make arrests or otherwise use violence. Residents for the most part voluntarily follow a traditional set of rules that they consider "both ancient and just."[2]

During The Lord of the Rings, Saruman captures the Shire and transforms it into an authoritarian society. When the protagonists return, they overthrow Saruman and restore traditional, anarchic self-government to the region.

The Shire has an agrarian economy, and residents spend most of their time "[g]rowing food and eating it."[3] The hobbits appear to self-manage their own "estates, farms, work- shops, and small trades."[4] The hobbits distrust and avoid any machinery "more complicated than a forgebellows, a water-mill, or a hand-loom."[5]

Some hobbits are significantly wealthier than others, but by custom they frequently give away their wealth at social gatherings. Hobbits are " as a rule, generous and not greedy"[6]

While the economy does not generally appear to include wage labor, a notable exception is that the unusually wealthy Bilbo Baggins, who acquired riches by traveling outside the Shire, hired a gardener for his estate. Bilbo's heir Frodo continued employing a gardener.[7]

The hobbits voluntarily follow a set of traditional rules. It is unheard of for one hobbit to kill another, based on Frodo Baggins's shock upon hearing that the hobbit Smeagol had murdered the hobbit Deagol.

There are only twelve sheriffs in the Shire, or three for each of the quarters. The sheriffs, according to Tolkein, "were in practice rather haywards than policemen, more concerned with the strayings of beasts than of people."[8] Robin Smallburrow, a sheriff, describes his job as “walking around the country and seeing folk, and hearing the news, and knowing where the good beer [is].”[9]

During The Lord of the Rings, Saruman captures the Shire and greatly strengthens the power of the sheriffs. When the protagonists finally return to the Shire and are placed under arrest, they react by laughing, since they are unused to the sheriffs exercising coercive power..[10]

Shire residents have a milita known as the Bounders, to protect the Shire from external threats.[11]