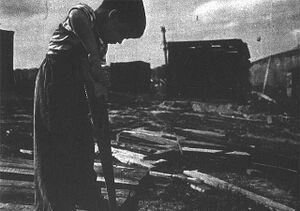 The Yard was an "adventure playground" in Minneapolis, Minnesota. The national magazine McCall's, which sponsored construction of the park, described the concept:

The idea behind THE YARD is simple — to give children their own spot of earth and plenty of tools and materials for digging, building and creating as they see fit. Instead of ready-made playground equipment, THE YARD is stockpiled with tools, used lumber, bricks, tiling, paint, nails, secondhand materials of all kinds. There’s an old railroad boxcar too, a 1934 jalopy and a milk truck body the youngsters turn into anything they like.[1]

From Colin Ward, Anarchy in Action:

When The Yard was opened in Minneapolis with the aim of giving the children 'their own spot of earth and plenty of tools and materials for digging, building and creating as they see fit',

it was every child for himself. The initial stockpile of secondhand lumber disappeared like ice off a hot stove. Children helped themselves to all they could carry, sawed off long boards when short pieces would have done. Some hoarded tools and supplies in secret caches. Everybody wanted to build the biggest shack in the shortest time. The workman­ship was shoddy.

Then came the bust. There wasn't a stick of lumber left. Hijacking raids were staged on half-finished shacks. Grumbling and bickering broke out. A few children packed up and left.

But on the second day of the great depression most of the youngsters banded together spontaneously for a salvage drive. Tools and nails came out of hiding. For over a week the youngsters made do with what they had. Rugged individualists who had insisted on building alone invited others to join in - and bring their supplies along. New ideas popped up for joint projects. By the time a fresh supply of lumber arrived a

community had been born.[2]