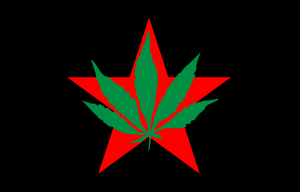 Flag of the Yippies

In 1967, a group of New Yorkers including Abbie Hoffman, Jerry Rubin, and Paul Krassner formed the New York Diggers, named after the anarchist San Francisco Diggers. A few months later, they renamed themselves the Youth International Party, or "Yippies" for short.[1]

A pseudonymous Yippie, going by "Jung," explained their flag in 1970 to the New York Times: “The black is for anarchy, the red star is for our five‐ point program and the leaf is marijuana, which is for getting ecologically stoned without polluting the environment.”[2]

The Yippies were best known for their pranks and street theater. One of their best-known actions involved running a pig, named Pigasus, for president in 1968.[3]

The Yippies apparently invented the act of throwing pies in the faces of political opponents, when the Yippie Tom Forcade pied the chairman of the President’s Commission on Obscenity and Pornography.[4]

Co-founders Abbie Hoffman and Jerry Rubin became minor celebrities, especially in the aftermath of a brutal police attack on protesters at Chicago's 1968 Democratic Party National Convention.[5] In trial for allegedly instigating a riot, Hoffman and Rubin gave a surreal and humorous performance. When asked where he resided, Hoffman said "I live in Woodstock Nation." When asked what state that was in, Hoffman explained, "It is in the state of mind."[6]

By 1972, Hoffman disavowed the Yippies, dismissing it as a joke and endorsing the Democratic presidential candidate George McGovern. Perceiving Hoffman as a sell-out, a radical faction of Yippies renamed themselves the Zippies. Gathered in Miami to protest the Democratic and Republican Party conventions, the Zippies made a point to visit Hoffman's hotel and throw him in the pool.[7]