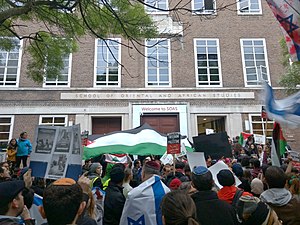 Palestinians launched the Boycott Divestment Sanctions (BDS) movement on 9 July 2005 in order to pressure Israel to respect human rights and international law. The decentralized movement, inclusive of many anti-authoritarian groups and individuals, has gained massive global grassroots support and has been labelled an "existential threat" and "strategic threat" by prominent Israeli sources. To get involved, visit [1].

The BDS movement is inspired by South Africa's anti-apartheid movement and decades of Palestinian resistance[2] such as the largely anti-authoritarian First Intifada.

1. Ending its occupation and colonization of all Arab lands and dismantling the Wall 2. Recognizing the fundamental rights of the Arab-Palestinian citizens of Israel to full equality; and 3. Respecting, protecting and promoting the rights of Palestinian refugees to return to their homes and properties as stipulated in UN resolution 194.[3]

The Boycott National Committee (BNC) has since specified that the first demand refers only to lands occupied since Israel's 1967 conquests, and many of the original signatories support a two-state solution.[4] Nonetheless, many participants say that fulfilling the three demands requires establishing a binational or secular democratic Palestine through a one-state or zero-state outcome.[5]

The Boycott National Committee (BNC), comprised of Palestinians, describes the BDS movement as being "decentralized." Any group of people can use the BDS acronym as long as they agree to the 2005 platform and principles of anti-racism and nonviolence. When a group using the BDS label does not adhere to these principle, the BNC might ask them to stop using the BDS name.[6]

If anything, the organization abides by certain tenets of anarchism in that it eschews top-down authority and has no officers. While it has informal arrangements of power and members with different levels of influence, no constitutional hierarchy exists. We reach decisions through consensus, defined in our case by a preponderance of agreement with no vocalized opposition. If a member disapproves of a proposed action, If a member disapproves of a proposed action, discussion ensues; if the dissenting member does not stand down from his or her disapproval, then the conversation continues. Without an adequate resolution, the action stalls, unless the dissenter approves of its adoption while maintaining his or her disagreement. Student members of the organizing committee (OC) have the same formal power as senior professors.[7]

In 2010, the Reut Institute, an Israeli Zionist think tank, called the deligitmation of Israel an "existential threat" and singled out BDS.[8] In 2015, Israel's president called BDS a "strategic threat."[9] The BDS website lists the following victories:

A timeline of victories can be found at the Visualizing Palestine website: https://visualizingpalestine.org/collective-action-timeline

Anarchist and anti-authoritarian supporters of BDS include the Black Rose / Rosa Negra Anarchist Federation[11], Industrial Workers of the World[12], and Anarchists Against the Wall.[13] Black Lives Matter, a U.S. movement organized along highly decentralized and anarchistic lines, supports BDS.[14] Although the Anarchist intellectual Noam Chomsky has famously criticized BDS, alleging that its demands are impractical in the near-term, he clarified in a 2017 statement that he supports the movement.[15] Palestinian Anarchists, like the Palestinian movement more generally, appear to support BDS.[16]