Movement of the Free Spirit 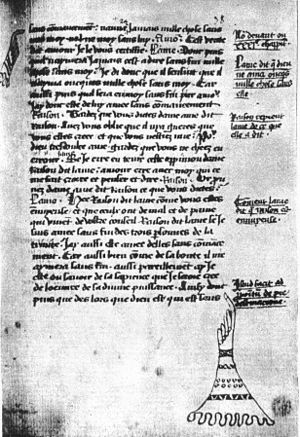 The Movement of the Free Spirit was a thirteenth- and fourteenth-century Christian heresy that spread across an area from present day Czech Republic to France. Involving a disporportionate number of women, they avoided work and have been compared to twentieth-century hippies. In an unsympathetic portrayal that would inadvertently capture the imagination of Anarchists and libertarian Marxists, the conservative historian Norman Cohn denounced the Free Spirits as “reckless” followers of “a quasi-mystical anarchism” and “precursors of Bakunin”: “a quasi-mystical anarchism—an affirmation of freedom so reckless and unqualified that it amounted to a total denial of every kind of restraint and limitation. These people could be regarded as remote precursors of Bakunin and Nietzsche—or rather of that bohemian intelligentsia which during the last half-century has been living from ideas once expressed by Bakunin and Nietzsche in their wilder moments.”[1]

Free Spirits believed they had attained a state of perfection where each member believed “that we was incapable of sin.” They practiced antinomianism, voluntary poverty, and allegedly assigned an emancipatory value to eroticism, “which incidentally is the value which ‘free love’ has often possessed in our own times,” Cohn noted in the 1960s. Women “played a large part” in the heresy, and many of these women belonged to a movement of beatas called the Beguines (their masculine counterpart was called the Beghards).[2] The Situationist historian Raoul Vaneigem describes the Free Spirits, with admiration, as people who “renounced all spiritual and temporal authority, seeking no more than to live in accordance with their own desires.”[3]

The Free Spirits emerged in Paris around 1200. They were quickly arrested by Church officials, and those who did not recant were burnt to death. However, the heresy was soon elaborated into a “mystical pantheism” by the University of Paris theologian Amaury.[4]

Later manifestations included currents in Swabia and within the Franciscans of Umbria. Important writings influenced by the Movement of the Free Spirits include Margaret Portete’s Mirror of the simple souls and works of John Hartmann. Portete, who was burned at the stake on 1 June 1310 for spreading her beliefs, described an existence where one is so immersed in love that she is incapable of sinning and is therefore freed from the fear of sin. Portete compared this permanent condition to the temporary bliss of a drunken man: “This soul, in this state, is like the drunken man. For the drunken man never cares what may befall him, whatever it may chance to be, any more than if it were nothing; and if he does care, then he is not truly drunk.” Vaneigem contrasts Porete’s reverence for nonhuman nature with the Church’s attitudes: “Whereas the Church was hostile to nature, Margaret proposed that it might be rehabilitated to its state before the Fall , before the appearance of sin and the invention of exchange. Access to it lies in the refinement of love, in an identification with the power it generates in everyone.”[5] Hartmann also elaborated on the condition of perfection and free from sin: “Those who are in this degree of perfection and in the freedom of spirit are no longer obliged to obey men, or any precept, or the rules of the Church: they are truly free.”[6]

Robert Lerner, a 1960s campus radical captivated by Norman Cohn’s The Pursuit of the Millennium, looked in the primary sources for more information on a supposed movement of proletarian social revolutionaries. The further he researched, the more he found his assumptions unfounded, as he explained in an important 1972 study The Heresy of the Free Spirit: <blockqoute> [M]y search for an organized sect comprised of lower-class Bakunins seemed like a continual shearing away at a shaggy dog that turned out to be nothing but shag. Faced with such diminishing returns I had no choice but to abandon my previous assumptions and develop a new interpretation which I now believe fully justified by the sources and which I will defend with the conviction of a convert.[7]

Lerner responded to Cohn as well as to other recent studies that largely recapitulated Cohn’s conclusions. Lerner insists that the Free Spirit movement “was far more typical of the late medieval search for God than has commonly been imposed,” and “it was not a revolutionary force.”[8]

However, some of Lerner’s own admissions suggest that the Free Spirit movement posed serious challenges to the patriarchy and hierarchy of the Church. Lerner points out, “[O]ne of the few generalizations that can be made without hesitancy is that a disproportionate number of the heretics were women.”[9] Moreover, they practiced (as Cohn would abhor and the Vaneigem would celebrate) a certain anti-work “idleness” that leads Lerner to compare them with twentieth-century hippies. Lerner writes, “Free Spirits, like the hippies, hoped to quicken the life of the ‘interior’ rather than the ‘exterior’ man and while some went preaching, others were sedentary and might have been entirely passive.” Most importantly, the Free Spirits criticized and often outright rejected Church hierarchy and the sacraments, as Lerner notes: “Over and over again Free Spirits argued for a direct relationship to God without sacramental mediation and insisted on their superiority to priests.”[10] Centuries before Luther, such challenges to ecclesiastical authority and sacraments well exceeded what the friar would eventually propose. The Free Spirits might not have been “revolutionary” in the modern sense, but it is hard to see them as anything but subversive.

The Free Spirits preceded and may have influenced later heresies including the fifteenth-century Bohemian Adamites (a radical offshoot of the Taborites, who are themselves a radical offshoot of the Hussite movement) and the alumbrados of Spain. Cohn argues, “[T]he Free Spirit flourished at various times both in Italy and in Spain […] similar doctrines [to Marguerite Porete’s and other Free Spirits’] were flourishing in Spain, amongst the mystics known as the Alumbrados.[11] Alistair Hamilton writes that the Free Spirits, thriving in late medieval German lands, “could have entered Spain” through the Order of St. Francis and influenced the alumbrados.[12]