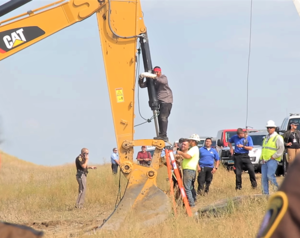 Led by the Indigenous Standing Rock Sioux nation of the Oceti Sakowin confederation, the Standing Rock Uprising, from April 2016 to February 2017, involved blockades, lockdowns, and even arsons against construction of the Dakota Access Pipeline. Resisters secured a temporary halt to construction in late 2016.

State and corporate authorities' response to the uprising was massive and intense, involving "dogs, rubber bullets, concussion grenades, tear gas, and sound cannons. No one was killed in any of the multiple acts of police repression only thanks to good luck and well-organized medical support. However, a Native woman lost her sight after being shot in the face with a tear grenade at close range and a solidarity protester had her arm partially blown off by a concussion grenade."[1] In 2017, the newly elected President Trump's election ensured that the pipeline was finished and began operating.

Anarchists were very involved in the uprising, and especially in the militant Red Warrior Camp. They sometimes clashed with liberal and pacifist elements. The Catholic Worker activists Ruby Montoya and Jessica Reznicek engaged in arson against the pipeline's construction. The Sierra Club gave a characteristic response of the Standing Rock Uprising's mainstream supporters: "Certainly, we had absolutely no knowledge about what these women were doing or were going to do, and we condemn any kind of damage or anything like that."[2]

"I would say the NoDAPL campaign was very important for a variety of reasons. While there have been a number of anti-pipeline campaigns in Canada, and in particular in BC, it was the first real struggle against a proposed pipeline to occur as construction began. In Canada, the proposed Enbridge Northern Gateway pipeline was eventually abandoned after several years of Indigenous resistance. At the Unis’tot’en camp, it doesn’t appear that the proposed natural gas pipeline has attempted to build on Unis’tot’en land. So the NoDAPL campaign was the first one to actively resist construction of a pipeline.

I think especially for Natives in the US, the NoDAPL campaign was very important, and I’m sure thousands of Native youth were radicalized in some way by participating in it.

Ultimately, however, the NoDAPL campaign failed. I would suggest this occurred for a number of reasons, the primary one being that the opposition, despite some militant actions that occurred, was primarily based on “non-violent civil disobedience” and pacifist methods. Any attempts at creating a diversity of tactics were largely squashed by the NGO-type organizers that dominated the debates on tactics, combined with the lack of experience among members of the Standing Rock reservation."[3]

The New York Times paraphrased Autonomist scholar Silvia Federici's analysis: "One of Federici’s most instructive examples of commoning is the protest campaign of the Standing Rock Sioux tribe in 2016 and 2017. In the course of fighting a pipeline project, the tribe and its allies built an encampment network that kept thousands of protesters housed and fed and safe, even as winter descended; they created a school for the children, recognizing that if whole families were going to participate, the children would need both care and education. In part because they made the camps a livable, long-term community, they were able sustain and amplify the effort into a movement with international support and ongoing momentum even though the camp itself was cleared by law enforcement in February 2017."[4]