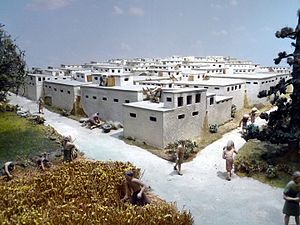 Model of the neolithic settlement ( 7300 BC ) of Catal Höyük. Source: Wikipedia

Çatalhöyük was a city in Anatolia that existed from 7500 to 5700 BCE, with an estimated 10,000 people.[1] One of the earliest known cities, Çatalhöyük is notable for gender equality, economic equality, the absence of a State, an absence of war, and an apparent ecological orientation. Ian Hodder, a Stanford archeologist who has led the excavation of the site since the 1990s, explains:

“People lived with the principle of equality in Çatalhöyük, especially considering the hierarchy that appeared in other settlements in the Middle East. This makes Çatalhöyük different. There was no leader, government or administrative building; men and women were equal.[2]

Çatalhöyük was part of a broader "Sesklo culture" which, according to Marija Gimbutas, had an "absence of outstanding central buildings which could suggest a hierarchy."[3] Citing the archeologist James Mellaart's work in the 1950s and 1960s Murray Bookchin writes:

Its tool kit and highly naturalistic artistry suggest an ecologically oriented community of late Paleolithic hunters and gatherers rather than an early Neolithic community of food cultivators. The culture is marked by a very sophisticated stone and bone technics, by markedly collective dwellings adorned with images of animals and shamanlike figures amidst paintings of reindeer, leopards, and bow-carrying hunters [... ] Nor do hierarchy and warfare seem to be features of the city's social life. Judging from the size of Çatal's dwellings and the implements found in burial remains, the city was fairly egalitarian despite minor differences that are observable. There are no 'obvious signs of violence or deliberate signs of destruction', Mellart observes for the original city and its nearby successor, both of which were simply abandoned for no apparent reason after centuries of occupancy. Cases of violent death among the hundreds of skeletons examined on the sites are notable for their absence.[4]

Çatalhöyük resisted domesticating cattle until 8000 BCE, even though the region's neighboring societies began it 1500 years earlier.[5] It therefore seems that Çatalhöyük's rejection of cattle domestication was a conscious choice. Although David Graeber and David Wengrow posit that they rejected cattle domestication in order to preserve men's prestige for hunting wild cattle,[6] another reason might be that they wished to preserve gender egalitarianism. As the anthropologist Lionel Sims writes, the shift from foraging to pastoralism generally meant that men no longer needed to continuously pay bride service by hunting and could for the first time 'purchase' a wife with a single payment of cattle. The bride's family "who once always stood in solidarity with her, now had an interest in disowning her to keep the cattle."[7]

Indeed, the eventual transition from hunting to cattle herding appears to have coincided with a decline in egalitarianism and with environmental problems caused by deforestation and overgrazing. In Discover Magazine, Jennifer Hattam writes, "Ongoing research may link the arrival of domesticated cattle with emerging inequality between households, and increasingly individualistic behavior among Çatalhöyük residents."[8]

With no elite class or gender hierarchy, the whole population experienced lives full of feasts, music, dance, and mural painting. Houses stood wall to wall with no space between them, forming what Mellaart called a "honeycomb structure." People moved between houses by walking across the rooftops. While people lived in nearly identical houses and were buried with roughly the same quality and quantity of goods, the wide diversity of these goods suggests to Bernhard Brosius that Çatalhöyük's society respected people's individuality.[9]

The religion appears to have been non-hierarchical and based on a goddesses-centered cosmology. Of 41 excavated sculptures of deities, 33 were of goddesses and only 8 depicted masculine gods. Although there were priestesses, there was "no evidence of a hierarchical organization."[10] Temples are distributed among regular houses, suggesting of religion with everyday life.[11]

Older houses had a somewhat greater density of prestigous objects such as hunting trophies and a volcanic glass called obsidian. This suggetss to Graeber and Wengrow that "elders, and perhaps elder women in particular, held positions of influence. But the more prestigious households are distributed among the less and do not coalesce into elite neighborhoods."[13]

The society seems to have been very peaceful, with no signs of violent death among the many hundreds of skeletons excavated by James Mellaart.[14] Paintings do not show evidence of war or crime.[15]

It also seems that feasts and festivals were frequent. Almost half of the adult skeletons showed signs of alteration that may have resulted from frequent dancing.[16]

Economic equality can be deduced from the facts that dwellings were all roughly the same size, and burial goods were of roughly the same quantity and quality.[17] There is no evidence that Çatalhöyük had an internal market economy.[18]

Researchers estimate that less than half of people's labor time focused on meeting people's basic needs, and the other half focused on cultural production such as organizing feasts, dances, rituals, education, and the painting of murals.[20]

Average average life expectancy, of 32 years, surpassed that of exploited populations for subsequent millennia, until around 1750.

Paintings of animals may have suggested a reverence for non-human life. The combination of small farming, hunting, and gathering fed the society that lasted about two millennia.[21]

While people were buried with goods, there is no evidence of grave robbery, and the paintings do not depict fighting or crime. Brosius speculates:

Taken as a whole, these facts today seem as the archaeology of an utopia. However, we must understand that 10,000 people without central power could never have lived together in such density for such a long time if they had not possessed nonviolent methods for solving conflicts in the first place. If use of force had been part of the repertoire of strategies for conflict resolution, settlements such as Çatalhöyük would not have been able to survive for such a long time - no one could have prevented the settlement from dissolving. Another argument in favour of the absence of violence a priori is the above mentioned complete absence of destruction in the cultic area: people had developed images of the beyond which were just as peaceful as they themselves were.[22]

Bernhard Brosius argues that Çatalhöyük existed in a context of widespread non-patriarchal "neolithic communism" lasting for three thousand years and spreading to all of Anatolia. There is evidence of a social revolution in the city of Cayonu in the year 7200 BCE that overthrew a violent class society and installed an apparently egalitarian society more similar to Çatalhöyük.

However, Catal Huyuk's buildings and artifacts remained exceptionally well-preserved compared to the neighboring cities and towns.[23]